Head Chef Jahdre Hayward was born in Bermuda and aged 15 moved to the United States to live with his aunt and uncle. Whilst in America, Jahdre studied culinary arts in Tampa, Florida and after completing his studies gained a job as a commis chef at The Savoy Hotel in London, under Anton Edelmann. At The Savoy, Jahdre soon moved up the rankings, becoming a chef de partie. Jahdre’s London based CV also includes Hanbury Manor, Rules restaurant, Oxo Tower, Novelli in the City and The Ritz.

After meeting future wife and Haywards Restaurant Manager, Amanda, the pair travelled to Australia in 2003. Jahdre worked briefly at Guillaume at Bennelong at the Sydney Opera House before the pair returned to London for three years. In 2007 both Jahdre and Amanda migrated to Melbourne, Australia where they gained a wealth of culinary experience.

In Australia, Jahdre worked as a sous chef at The National Gallery before moving to the Melbourne Wine Room, where he became the head chef, and later the Millswyn restaurant.  Amanda worked in a number of positions at several Melbourne restaurants including Grossi Florentino, Maze by Gordon Ramsey and Circa, The Prince, where she became assistant manager. 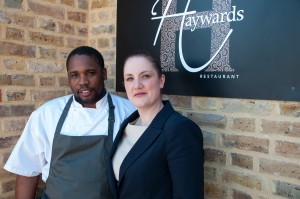